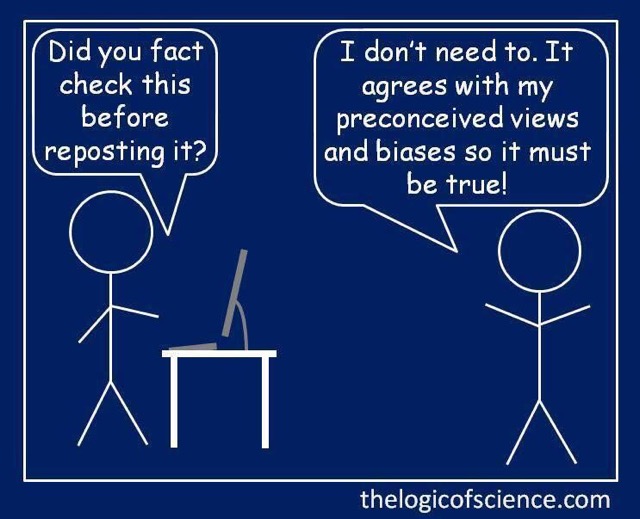 It really doesn’t matter what side of an issue you stand on. Christian or not, you will find someone who has written something that will agree with or support what you have chosen to believe.

I was reflecting on this as I browsed the stacks of our public library while my youngest daughter was selecting books.

At one time you at least needed to be a published author, or be published in some magazine or peer review journal, in order for the world to read what you were trying to get out there. Even though it was nowhere near foolproof, most stuff that wasn’t valid or worth reading never made the mainstream. That is not true today. This blog is a case in point, although I think I have some pretty decent ideas and my thought processes are mostly valid. I don’t have thousands of followers and no publishing groups are beating down my door for my next book or article. (I submitted some poetry to a journal for a contest once and was rejected… oh well).

Back on point, today anyone who is anyone can find someone who will support their point of view – whether biblical or not, scientific or not, moral, ethical, legal – it doesn’t seem to matter. As long as someone agrees with your view, it doesn’t matter how subjective it may be; or twisted in logic or interpretation or method. As long as it has support, it must be fact. Truth is in the eye of the beholder, and fact is simply how many people you can get to agree to your point of view.

Regardless of objective truth, or scientific fact, one of my pet peeves when it comes to justifying sinful behavior is: I was born this way, it’s natural, or I am only human.
This doesn’t just apply to sexuality, although you find the arguments in that arena most often. It goes far beyond that.

In my case, I was genetically born with all the markers of an alcoholic (which can be proven). I was also genetically born with heterosexual desires. So I could use genetics as an excuse for addiction, drunkenness, and every type of sexual indiscretion with members of the opposite sex (all things the Bible calls sin). I could use nature to say that it is natural for a male to mate with as many females as possible, to propagate the species. Or, I could just say, “Well, I am only human,” or worse yet, “God made me this way.”
Instead, I find mercy, grace, and forgiveness at the cross. I stay clean and sober because God gave me the power to fight my afflictions. I remain faithful to my wife because I entered in to a covenanted marriage relationship with her, according to God’s design for a man to leave his mother and father and cleave to his wife becoming one flesh and forsaking all others. I strive to be the best man of God I can be.

Another example is men born with XYY chromosome, which are known to be a marker for violence, psychotic, and sociopathic tendencies. We pardon every rapist and murderer in our prison systems based on a genetic excuse, for those who qualify. They were born that way regardless of law and order. When judging rapists, we could take an example from nature. The most intelligent of marine mammals, dolphins, gang rape females to ensure pregnancy to propagate their species. Therefore, according to the laws of nature, why should rape be illegal or immoral in human society?

In nature not every species is monogamous, mating for life, so we could say it’s better to be like animals and for survival, propagate the species with a variety of mates to encourage diverse traits. Survival of the fittest.

Although there is still no concrete genetic evidence for homosexuality, I have known children that exhibited homosexual traits. By the time they are near adulthood (and other contributing factors of nurture, circumstance, psychology) they enter a lifestyle of same sex attraction. We could say, “We see homosexuality in certain apes, therefore it is also found in nature and therefore a natural desire.” That is true; however, it is used as a method of domination and submission in those apes, and has nothing to do with pleasure, love, lust, or attraction.

With so many voices, to which voices should we listen? As human beings, with our selfish natures, we tend to hear the voices we want to hear! We tend to find the opinion that matches our own, makes us most comfortable, allows us to fulfill our own desires and that justifies our behavior. We want to hear the voice that makes our choices right, acceptable and natural, that follows the path of least resistance – not the voice that challenges or convinces us to change or yield.

We all have choice! It was given to us as a precious gift of God called free will! Our first ancestors used the power of choice against God’s original design, which has corrupted our very natures, our very DNA. The further from the original choice we get, the more imperfect our nature has become. Call it genetic decay, if you like. The Bible simply calls it sin – our imperfection missing the standard set by the Perfect Creator.

To say God made me this way, he made me to sin, is a terrible and egregious lie. Our sin nature that we are born with, along with genetic decay (original sin), has made us this way. My alcoholism, addiction, desire for women not my wife, bipolar depression are all the result of genetic decay, with an emphasis on my own personal choices to indulge in those things rather than the things of God.

I have found a large measure of relief from bondage to self though God. My God sent his one and only Son to die in my place – for my genetic decay and my willful choices (sin)- so that I can have a relationship with my Heavenly Father. By agreeing with God that those ‘natural’ tendencies are truly unnatural and go against his divine will and standard (confession), and by asking for forgiveness and intentionally turning from those things toward the direction he wants me life to go (repentance), I find victory over them (salvation).

It is sometimes a struggle to put him first and my fellow man next, and myself last. To choose to live according to the objective and divine standard that He has set down in his Word rather than my own, or at least the subjective ones that agree with how I would want things to be.

I was born imperfect. We all were and will continue to be. However, I will not take pride in my imperfection! I will not celebrate my independence from the standards God has set down! God did not make me how I was.

Through his mercy and grace, I am reborn! I am made new! I am being conformed to the image of His Son, as our original ancestors were created to be in His image. Through Jesus Christ, the indwelling Holy Spirit, and the love of my Heavenly Father, I am being remade into how I should be, not what comes “naturally!”

His love extends to all his creation! He desires all to come to him in repentance and to seek his forgiveness! He sacrificed his Son to make that possible!

He wants us to be reborn in a relationship with HIM!